What About the Russians?

Since 2016, if you haven’t heard how the Russians have been interfering with our elections then you’ve probably been living in a cave.

Much has been said about those pesky Russians with all their blackmail schemes in collusion with Donald Trump.

However, don’t you find it a bit odd when you read in the news how a Qanon “conspiracy theory” claims the world is ruled by pedophiles who are protected by the Big Tech companies?

And at the same time these same sources refuse to talk about Hunter Biden’s laptop.

And, tech companies are banning those who do talk about it?

It must be the Russians again and their Whores-Of-Babble-On Presstitutes.

Cue up: Wisconsin Senator Joe McCarthy from the December 2, 1954.

McCarthy was censured by the Senate, in a vote of 67-22, making him one of the few senators ever to be disciplined in this fashion.

He dared to speak out against Communism and Socialism.

Maybe old Joe was on to something back then.

Ironically (or NOT) the media coverage of McCarthy made him out to be the Dr. Evil of his time.

However, the censorship carried out by today’s Big Tech companies (Cough! Biden scandal cover-up Hairball Cough!) makes the McCarthy scandal look like a pimple on an elephant’s butt (pun intended) by comparison.

The sheeple still believe that those “pesky Russians” were responsible for Trump winning in 2016 and are trying to do the same in 2020.

As a result, the point they’re missing is the real Russian plot has been – and still is – the conversion of the press into a tool of the socialist state.

Cue up:  Vladimir Ilyich Ulyanov…who went under the alias of Lenin.

Is it just me, or does anyone else see a resemblance between Lenin (minus the mustache and beard) and Putin?

To see how this all ties in with the coming GREAT RESET, be sure to read The Fall of the Cabal in our October edition of “…In Plain English.” 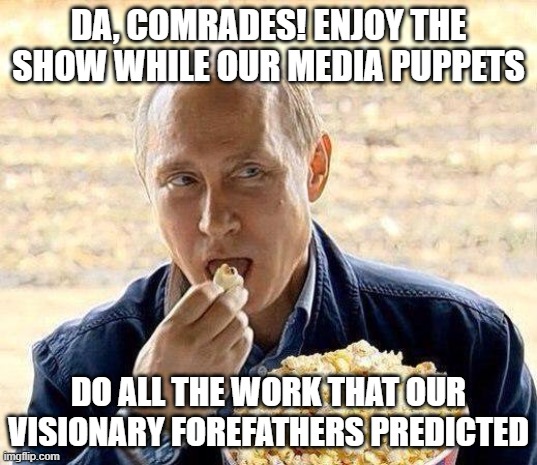