Yes, she said that.

I wasn’t aware that young black voters were asking for her forgiveness or her permission.

Ironically (or NOT) people like Waters are the reason why more black voters are turning towards Trump.

It’s truly sad that the Democrat party can’t see the hypocrisy in their own actions.

Unfortunately, the way many Democrat leaders speak about the Black community – or for that matter any minority community – you would think they own them.

And now they’re not even subtle about it.

Maybe it’s on their mind that young black voters are waking up to the reality of what Trump has actually done for them.

Prior to the CoronaHoax fake pandemic, Trump’s policies led to the lowest unemployment rate for Black Americans, Latinos and other minorities in U.S. history.

As a result, black voters aren’t worried about being disowned by Maxine Waters.

And are willfully getting on the Trump Train.

Instead of buying into the generational welfare mentality that Democrats have used on blacks for decades, young black voters are now making their voices heard in this election.

And it couldn’t come at a better time.

Thanks, Maxine.  Your ongoing spewing of hatred has backfired.

And while most people are very forgiving, James Brown might never forgive you for wearing his wig.

More stories like this one can be found in our “…In Plain English” newsletter HERE. 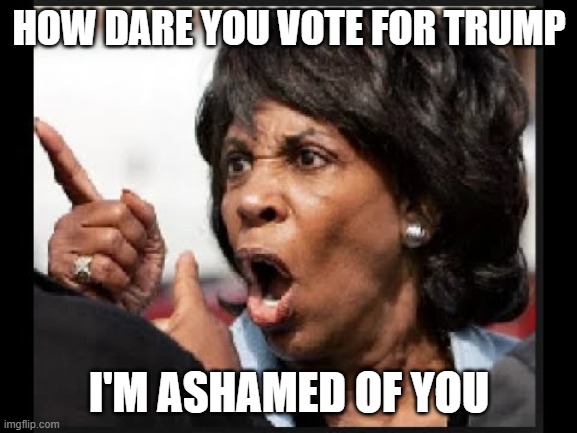