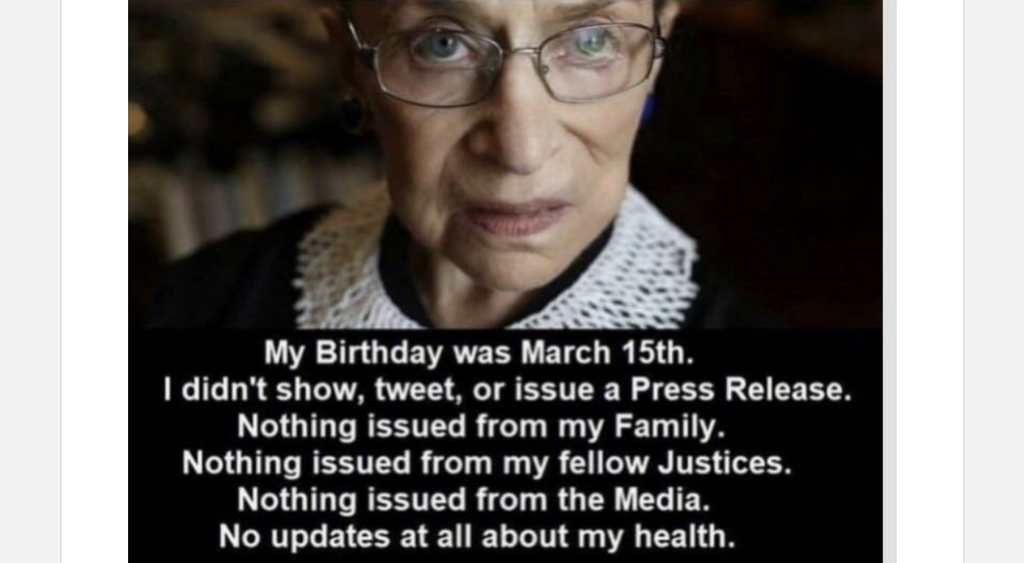 (Note…the above is NOT a current photo of RBG…In fact, when was the last time you saw a recent photo of her?)

By now we’ve all heard that Justice Ruth Bader Ginsburg is still alive and well.

At least that’s what the Whores-of-Babylon-Media Presstitutes want you to believe.

I’m still trying to figure out how she’s performing her normal functions as a Supreme Court Associate (from her home since December 2018).

Supposedly she was seen at an Amos Oz commemoration event in Washington in April.

Ironically (or NOT) there wasn’t any press coverage nor flocks of photographers there to take her picture.

Why wouldn’t the media be clamoring all over themselves to PROVE Ginsburg is well and can function on her own?

Under normal circumstances wouldn’t someone with Ruthie’s convictions have something to say about the State of Alabama recently making abortions illegal?

As recently as June 10, Fox News ran a 4:39 minute video about how Justice Ruth Bader hints at sharp divisions within the Supreme Court.

The problem with the video was it didn’t have any footage, video, or audio of Ms. Ginsburg.  LOL!

The whole piece featured two reporters bantering back and forth about what Ginsburg allegedly said.

Their idea of journalism was showing several still photos of her (taken back in 1958) with quotes by her picture.

I’m pointing this out so all of you Fox News fans should realize that their fake Ginsburg story shows that they’re just as fraudulent as all the other bought-and-paid-for presstitutes.

Instead of listening to all of their garbage, get an inside perspective of Wall Street and how the markets really work in our “…In Plain English” newsletter. (HERE)

“It’s Not Just About Finance.”

And you’ll learn from our 108+ years of experience how to beat the pants off the Wall Street Gurus.

Act now before we raise our prices.