Wall Street’s Boyz in the “Club” have a track record of how it systematically destroys women.

I’m not talking about the average woman here.

I’m referring to women who have made a name for themselves in business and/or has successfully climbed the ranks in the financial world.

Martha Stewart was one of the most well-known victims of the “Club” members in that she was convicted of “insider trading” and subsequently went to jail.

$239,000 is chump change compared to the multi-billions made on a regular basis by many “Club” members who rarely get taken to task for their crime.

Instead, they get a slap on the wrist and pay a fine to the equally corrupt SEC.

Martha Stewart’s real crime was stepping on the wrong toes.

Cue up:  Cathie Wood and her ARKK ETF.

In the last few years, Cathie Wood’s Ark Innovation ETF catapulted to fame and made her the Darling of Wall Street.

At least that’s what she was led to believe.

And for the last two years she was notorious for “doubling down” on stocks in her ETF when the markets dipped.

And she adored all the attention and accolades for her keen business acumen by beating most Wall Street experts and for “Sticking it to the chauvinist misogynistic pigs on Wall Street.”

Unfortunately for her, the markets – with help from the Boyz in the “Club” – cut her off at the knees.

And so far, this year her Flagship ETF (ARKK) is down a whopping 67%.

Ironically (or NOT) Cathie announced she finally “Sees Recession,” and blames her performance on the Fed and “Incredible” shorting activity.

The shorting was compliments of the “Club.”

The truth is no self-respecting trader ever blames “short sellers” for their losing long positions.

Traders have total control and freedom to manage their accounts.

Ms. Wood could have closed her long positions and taken short positions when the Fed announced they were going to raise rates.

But she ignored reality…accelerating inflation.

And she did what losing traders do…she doubled and tripled down on her losing positions.

The boyz then did what sharks do when they smell blood in the water.

The rest, as they say, is history.

And like another former female superstar, Mary Meeker – Aka “queen of the internet” back in 1999-2000 – Cathie Wood’s 15 minutes of fame has gone by the wayside.

Whether you’re a superstar or simply a small investor, Wall Street has plenty of mine fields to blow up your portfolio.

Learn how to avoid them (HERE).

Share this with a friend…especially if they know who Cathie Wood is.

At Financial$Matter We’re Not Just About Finance. 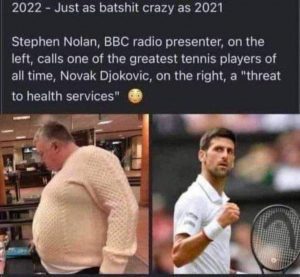 Djokovic Banned from Aussie Open for No Jab